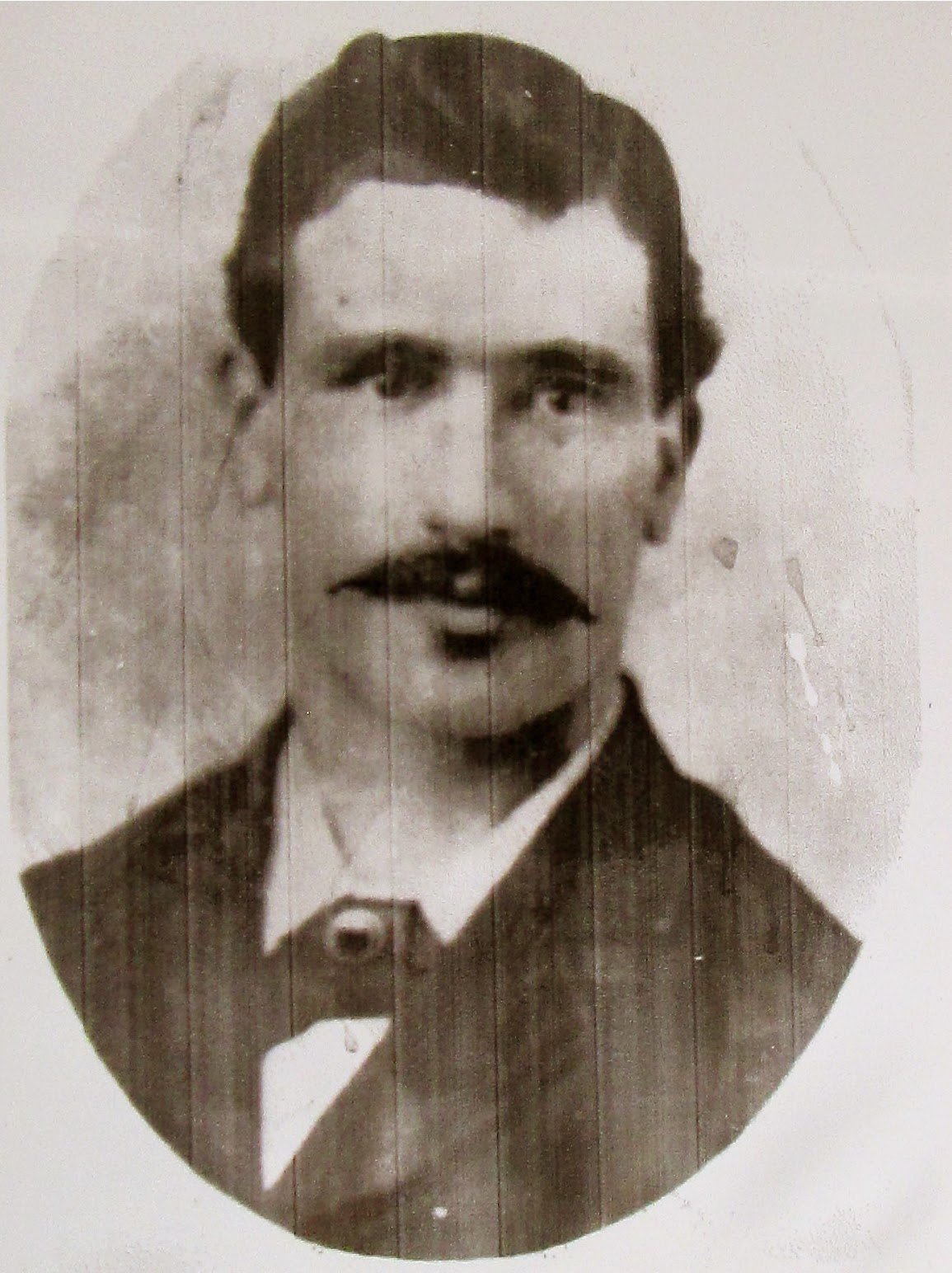 Mace T. Bowman, Sheriff of Colfax County,
"The fastest gun in the territory, the only man to make
Clay Allison back down."


Many of the locations and the peripheral events and characters in my book "Into the Shadowlands" are true. The St. James Hotel in Cimarron is a real place, so too the Santa Fe Ring whose corruption and greed led to the Colfax County War (and later the Lincoln County War). During the 'ring's' reign, there was an enormous amount of murder and mayhem, reprisals and lynchings. Even assassination plots. The St. James Hotel stood center stage to much of that violence but despite the fact that its walls hum with a kind of malevolent echo, I love the place. A few years back (before its complete re-model) I stayed in one of its notorious rooms and although I didn't see any ghosts, the narrow creaking corridors made me feel like I could bump into one at every turn! There are bullet holes in the pressed tin ceiling of the old bar and I played a round of poker in the room still devoted to the game. There is a rogues gallery of photographs on the walls along one corridor. Everyone from Wyatt Earp and Clay Allison to the assassinated Reverend Tolby (whose death triggered the Colfax County War) is represented.... most of them stayed at the hotel at one time or another.
It was along this gallery that my passion for New Mexico history was truly ignited. When I first saw a photo of a man named Mace T. Bowman, Sheriff of Colfax county... I instantly fell in love with him! I also felt that I had known him and my emotions were so strong that I vowed to research him.  The quote next to his photo stated he was the fastest gun in the territory and the only man to make Clay Allison (the infamous gunfighter) back down. My intrigue was further piqued when I noticed his name in an old guest registry that was on display. It was opened to the page in which he had rented a room back in 1881. When I asked the receptionist why that page was displayed, she said that it was because Jesse James had signed in that day, under his alias R. H. Howard!  Since then I have found no mention of this in anything written about Mace. Were these two ex-Confederates known to each other? Were they friends? Was there some kind of clandestine 'meeting,' one outlaw, one lawman (who, like many in his day, walked both sides of the law)? Or maybe it was just a coincidence and neither of them was even aware of the other. It is one of those potential stories that will forever be lost to history.
Mace had died in Trinidad when he was just 37 (apparently from complications due to a Civil War wound when he'd been shot in one lung) and was buried in Springer. Like Julia from "Into the Shadowlands," I researched his name online and found an out-of-print book about him. Although it was over $100, (which was a lot of money for me at the time,) I didn't hesitate to order it. I will not detail his life in this blog but it was that instant attraction and curiosity to a man's photo on the wall of the St. James Hotel that inspired the main thread of Shadowlands. I know exactly how Julia feels! When I visited Mace's grave at Springer I felt real sadness and a longing to know more and to see him.... 'again.'
Mace is not the inspiration for the character Jameson Tate in my book, but my feelings and curiosity about him are certainly the inspiration for the theme of the book. He does make a brief appearance in "Into the Shadowlands" but only as a peripheral character, a friend of Clay Allison (which he was for a time,) drinking in the St. James' bar when Tate and his friend John Calhoun stroll in. 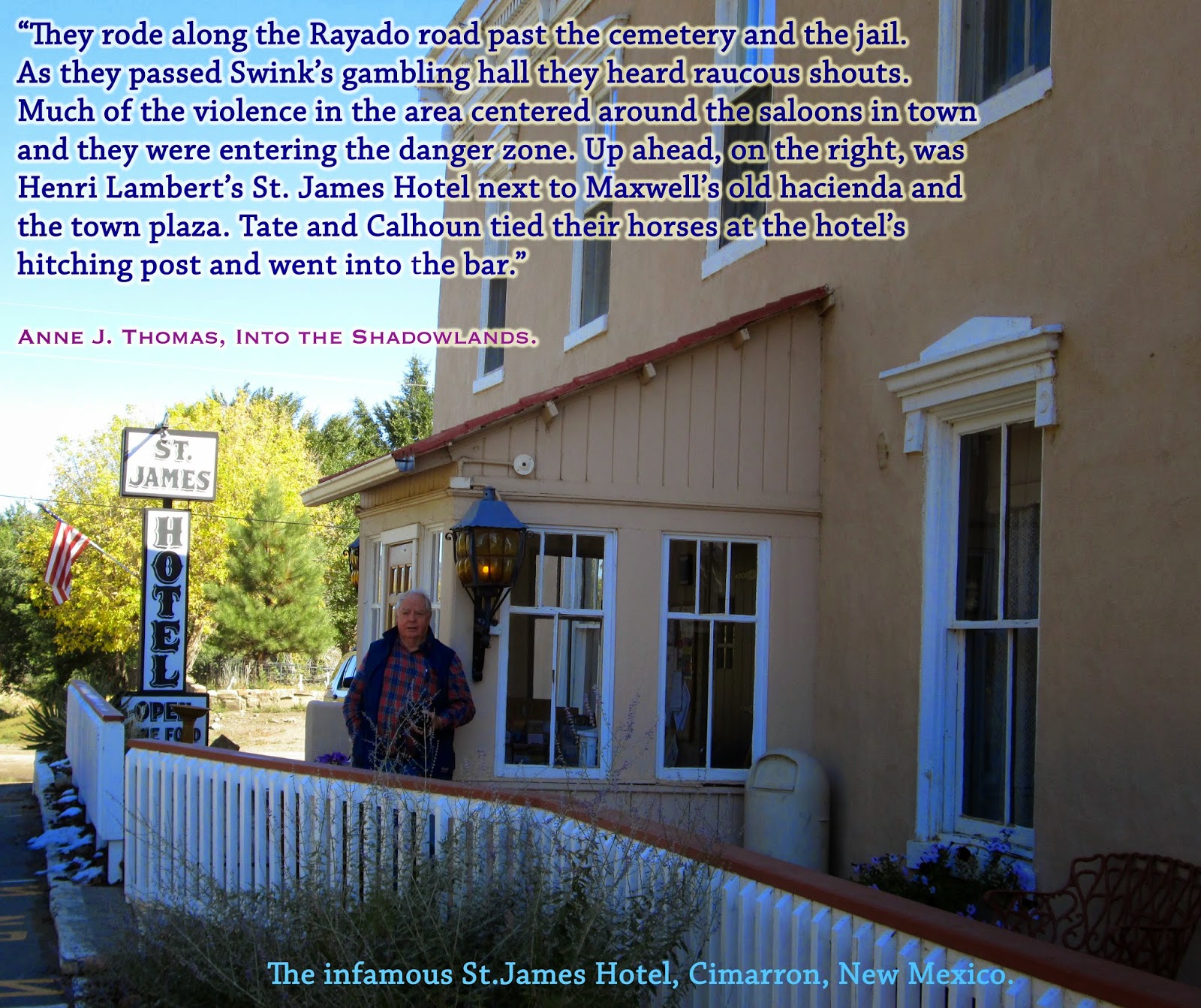 My dad standing outside the St. James Hotel in Cimarron.


Posted by Jackie Fleming at 7:48 AM No comments: