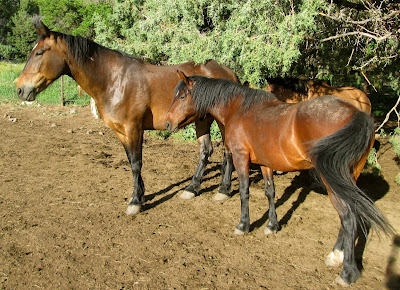 Since I made the disappointing decision that Quick Draw (the big 16-hand mustang) may be too lame to join our Santa Fe Trail ride in the fall, I will try to give him his chance to shine in the upcoming Centennial Cowboy Reunion parade in Las Vegas, NM instead! I will also try to bring his girlfriend Poco too, (pictured here with him... they are inseparable!) Both of their stories are featured in my book "Brand Name."....

Quick Draw was originally rounded up in Nevada but Poco's origins are unknown... (I've yet to shave her neck and send a photo of her brand to the BLM so they can give me her details.) Quick Draw was used as a trail horse and for rounding up cattle before I bought him and Poco was an award winning child's barrel racer and trail riding contest winner. She was going to be put up as an item in a yard sale before I bought her in 2012. Both have lameness issues. Quick Draw has ringbone and Poco has arthritis in one knee. The parade is only 2 miles long though, on a good street, and so I think they should both be OK for one day. So, although they will neither participate in the Santa Fe Trail ride, they will have their day in the spotlight! (Fingers crossed.) Check out this wonderful event scheduled for August 2015!:

Meanwhile, I am working with Sissy to get her ready to pull the wagon (or maybe I should, get myself ready) and I am also plugging away at a first draft of the sequel to my book "Into the Shadowlands." The new book will be called "Whispers across the Plane." It will pick up where we left off with Tate and Abby, Julia and Lisa and introduce a few new characters, including Richard Szabo/Book McCready. There is also going to be a wild horse element in the new book, both past and present.  "Into the Shadowlands."


Posted by Jackie Fleming at 5:23 PM No comments: 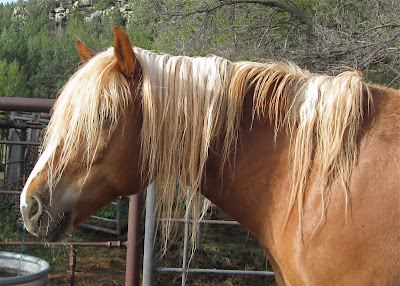 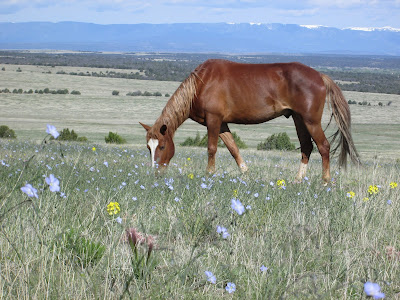 Suerte grazing among the wildflowers after his ordeal
with the rattlesnake bite.

Posted by Jackie Fleming at 5:06 AM No comments: 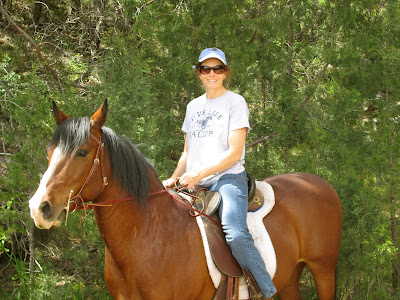 Riding my mustang Pistol... we are both a bit rusty and so we'll be
easing into it slowly!

And so finally, after much talk, I started my 'training' last month. Mostly that means just getting in the saddle and seeing if all of my joints fall apart. Luckily, even after a long hiatus, both Pistol (one of my mustangs) and I did OK. Little by little we will get in shape. Pistol was originally rounded up in Nevada (his story is featured in my book "Brand Name.") He was used by the man I got him from to teach students from the United World College in Las Vegas, NM ("UWC of the American West") about horsemanship and how to ride. It is a wonderful 'full circle' for me as I attended the UWC of South-East Asia in Singapore in the early 80s. It was a great school and the only one I thrived at. I loved my time there and still have many friends around the world who I stay in touch with. The UWC at Las Vegas (New Mexico... not the one in Nevada!) is only 20 miles from where I now live which is one of those serendipitous coincidences... especially when you see how remote and rough-around-the-edges the NM Las Vegas is! It is still very much the Wild West out here and it makes you wonder how and why they chose to locate this international school (one of several around the world) here. I often imagine some of those students arriving at their new school for the first time, wondering what happened to all of the casinos they had envisioned when they had started their journeys to the famed Las Vegas! There must be at least one or two each year who are shocked when they arrive at this small city, perched where the the Sangre de Cristo Mountains meet the plains in dusty New Mexico.

Las Vegas is featured, past and present, in my book "Into the Shadowlands." Its history is very colorful, scene of much murder and mayhem. To find out more about this infamous town, you can read the book "Wildest of the Wild West" by Howard Bryan. It is fascinating and hard to put down, a whose who of many famous names of the old West.

At this point I am not sure which horse(s) will be a part of the ride this fall. Only riding them will reveal who is most suitable and who is still sound!.... Hopefully that doesn't apply to me too! 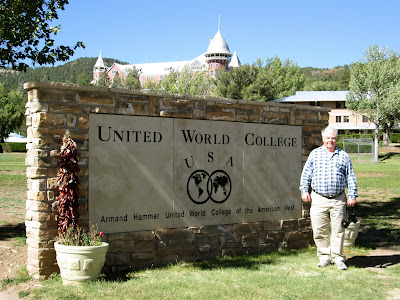 My dad standing outside the United World College in Las Vegas, NM.


Posted by Jackie Fleming at 5:25 AM No comments: