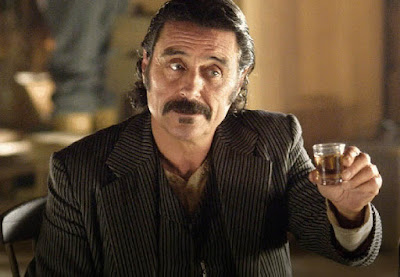 Well I should have heeded Al Swearengen's (a character from the TV show "Deadwood,") words of wisdom. "Announcing your plans is a good way to hear God laugh." Just as I was making plans and telling all who would listen that I was going to do a wagon ride/horse ride along the Santa Fe Trail this fall, a non-event riding accident has made me a bit of a cripple for the last 10 days. Needless to say, training is on hold... yet again!

I was riding Pistol out in the fields by where I live and a couple gleeful bucks (with a twist) plopped me on the ground with a very hard thump. I landed on my lower back/pelvis and I have to say I was shocked at just how hard it impacted my 50-year-old body! When I could finally breathe (it knocked the wind out of me,) I found I couldn't get up. My legs worked but I had no faith in my mid-section to support me, let alone walk back across overgrown fields holding onto a horse. Pistol didn't run off, he just stood nearby grazing.
Thankfully, a lot of yelling got the attention of Joe and his wife Patti... the folks who own the farm where I live... and they rushed over in their truck to get me. Patti led Pistol back to his corral and Joe and their son Clay, dropped me back at my trailer.

I will not give a long winded account of injuries. Mercifully no broken bones (I don't think) but a very bruised back and pelvis and ribs on one side. A recurring hip problem I have dealt with from time to time, went into overdrive and I couldn't walk on that hip for several days, getting around slowly with a crutch. My ribs are still sore and my pelvis feels tender and 'rattly,' no other word for it. I do feel like my 'cage was rattled,' and all is undermined! I can't lift anything heavy or pull too hard (This is 10 days on from the accident.) But, each day there is some improvement although it feels so slow. I am not used to not being robust and active!

So, plans are up in the air but I still want to do a wagon ride... or several... over the next few months. Maybe a series of day rides. I will heed Al Swearengen though.... I will not announce anything from now on.... until the ride/rides are done!

Posted by Jackie Fleming at 9:04 AM No comments:

Look out world, I'm in the driver's seat! 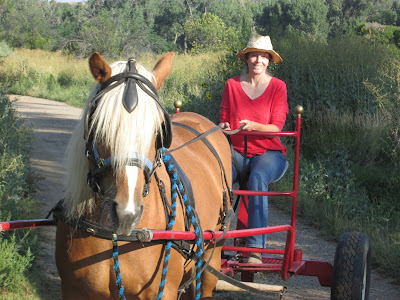 Me in the driver's seat!

I love, love, love this. What a way to see the world, clopping along the lanes, behind a sweet little horse like Sissy. Jerome has been accompanying me though as I am still not confident behind the wheel. But, I hope to soon be doing this on a regular basis, without a chaperone,  and both Sissy, Holly and I can see a lot of the Santa Fe Trail (and its landmarks) as a team from my wagon!

Posted by Jackie Fleming at 8:47 AM No comments:

In mid-August I was lucky enough to have the help of Jerome (the guy who trims my horses' hooves and does fence work for me) and his family to connect Sissy to the training cart for the first time. Like I have said before, Sissy has done all this before, but I haven't. I wanted it all to be safe though and so I asked Jerome etc to act as back-up for me. Jerome and his uncle Tranquelino (Tranque) have a lot of experience driving horses and have their own team of draft horses. It all went well. A great day.... and many thanks to Jerome for bringing in the big guns (aka his family) to help! And, Sissy was a trooper. Tranque said she is a great little horse and he was very impressed.. 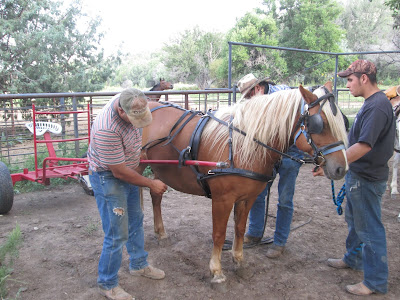 Jerome and friends helping to get Sissy connected to the cart for the first time. 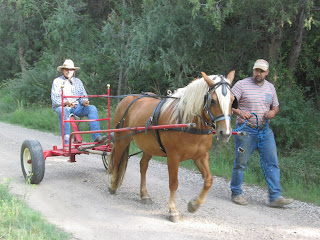 Tranque (driving) and Jerome with Sissy. Both of them have experience with draft horses, which I don't. 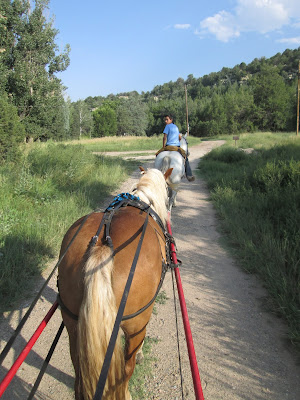 Sissy did great. Jerome's son rides out in front just incase Sissy bolts or needs the security of another horse.

Posted by Jackie Fleming at 8:42 AM No comments: 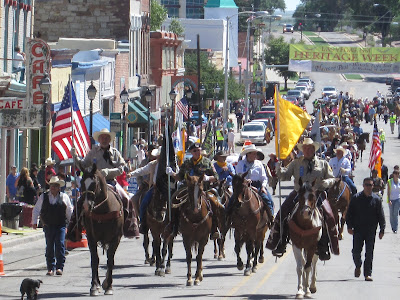 Well, I didn't make it into the parade with Quick Draw and Poco.  About a week or so before the parade, my little dog Holly got trampled by two horses who were fighting in the paddock. The horses were galloping, full speed, along a fence line, one horse biting chunks out of the other as he pressured him into the fence. In the middle of that terrifying scene, I heard my dog scream, although I couldn't see her. The aggressor horse (Pistol) ran the other one, (Quick Draw,) right into the barbed wire fence at the end of the paddock. Mercifully QD mostly jumped it, although he snagged a foot on the way over and fell. He was uninjured though and got up and understandably ran off! I was so intent on catching QD and restoring safety and order to the farm herd of horses that I didn't think of Holly... at first. After I easily caught QD,  I walked him back to the paddock (I removed Pistol and put him in jail for a while!) and that is when I found my wee pup lying motionless in the grass.
To cut a long story short, she was awake but couldn't move. I thought she had been crushed or had a broken back. I was distraught, she is my best pal and right-hand pup. When I rushed her to the vet he diagnoses a concussion and gave her meds.  She was able to walk again but was slow, quiet and subdued. After several days though, she began to return to her old tireless, effusive self. Phew!

Needless to say, training to be in the Cowboy Reunion, One-Hundreth Anniversary Parade was no longer a priority. I went to watch it though instead. It was great. About 150 horses riding through the old streets of Las Vegas! 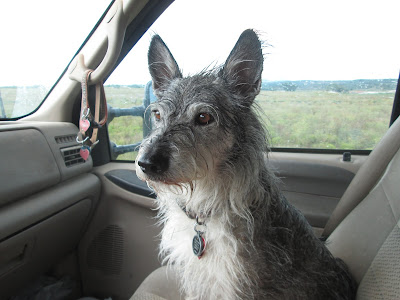 My pup Holly, helping me with chores in the rain, much improved from her near death experience.


Posted by Jackie Fleming at 8:29 AM No comments: