Oh boy! It is 2017! Where did the time go? I realize it has been 2 years since I wrote anything in this blog. To be fair, in the intervening time I have built an entire adobe house... mostly single-handed! I now live in my double-adobe house (meaning double walls which are almost 2 feet thick) out on the range with my herd of horses. I will do a separate blog, perhaps, with some of the construction photos, but for now, I am going to do a brief update. The house is called "Sombra Pais," which basically means Shadowland. I am glad I have experienced building a traditional adobe house but never, ever, want to do it again! There are still numerous finishing jobs to do but it is livable and I have been living in it for almost (November 30th, 2016 was when I moved in,) a year. Some of my horses are still over at the farm in Cherry Valley (where I lived before moving out to the land in June 2016, I lived in my trailer  while I was working on the house,) but most of them are here with me on our happy 1,300 acre Shadowlands Ranch. 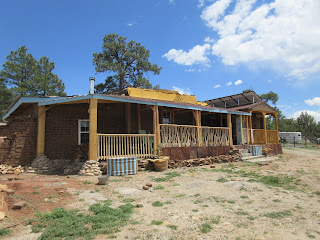 The other thing that happened in 2016 is that I bought a pinto horse. It is a long story but her name is Fancy (Fantasy was the name she came with.... which she is!) and she is a sweetheart. Originally an Amish horse who pulled wagons and was used for riding too, she was sold to a broker in Missouri and I bought her, sight unseen, off the internet. Fancy was categorized as 'bomb proof,' and for the most part, so far, she is! When I first bought her, in early 2016, we went on several rides, many of them incorporating wagon ruts from the Santa Fe Trail.... what a thrill! When I started building my house in March '16 though, the riding petered out as I got somewhat single-minded about finishing it by Christmas (which I did) and my body and energy were all used up with the construction work. Last month (October 2017) however, I got back in the saddle again! Yiipppeee! And my enthusiasm to get back to the business of my books and doing some kind of Santa Fe Trail rides has been rekindled. 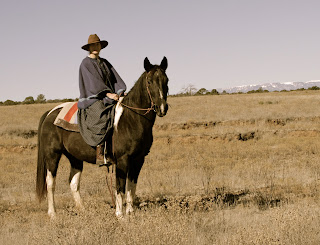 Fancy and me in costume with wagon ruts behind us. 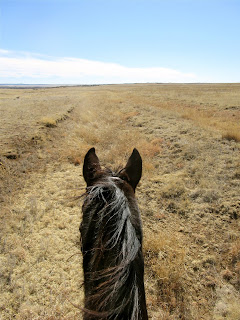 Riding Fancy in some wagon ruts!


Posted by Jackie Fleming at 8:10 AM No comments: