Well, I have FINALLY got my novel "Into the Shadowlands" into paperback and so I feel inspired to begin some kind of Santa Fe Trail adventure. It isn't the elaborate wagon ride down the trail I had planned a few years back, but this month Fancy and I hit some Santa Fe Trail landmarks. With my horse trailer, I am taking Fancy to various Santa Fe Trail sites where we either pose for a photo or actually get to ride around in the immediate area of the wagon ruts. Which is the best! I dress in 1800s costume and use the best of my imagination to not only try to relive the experience of those long ago travelers, but also to convey what that feels like to anyone interested enough to tune into my facebook posts on the Shadowlands ranch site. We have done quite a few sites already this month, a lot are out of sequence though but I will try to stay in sequence for this blog.

I will start as if we are heading east out of Santa Fe. The first stop, once you climb through the Glorieta Pass, is Pigeon's Ranch, a stage stop and hostelry along the old Santa Fe Trail. Established by Alexander Valle in 1850, it became a strategic Civil War location during the Battle of Glorieta in 1862. During that battle, often referred to as the 'Gettysburg of the West,' the ranch headquarters alternately changed hands between the Confederate and Union forces. It served as a make-shift hospital and bodies of soldiers (from both sides) were stacked to the ceiling in one of its rooms. My characters Abby and Tate pass by here in my book "Into the Shadowlands" which is set in 1876. 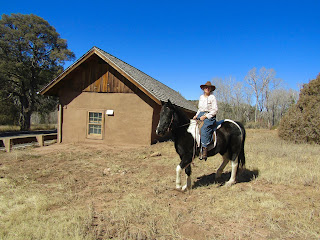 Fancy and I outside what is left of Pigeon's Ranch. The road to the left was once the Santa Fe Trail. 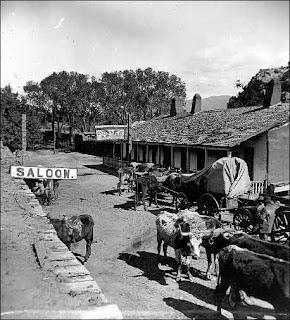 Pigeon's Ranch in the days of the trail. The Santa Fe Trail ran right through the middle of it.

The next camping place and point of interest was the Pecos Ruins. The site of a once extensive and strategically located Indian Pueblo and Spanish Mission Church. Santa Fe Trail travelers often camped near the ruins and explored the remains of its stone and adobe structures. Many wrote about their explorations in diaries and official accounts. Much is written about these Indians, which I will not try to cover here. But to read more about the fascinating history of the Pecos Pueblo, go to this link: Pecos National Monument.  My characters Tate and Abby camp at these ruins in my novel. 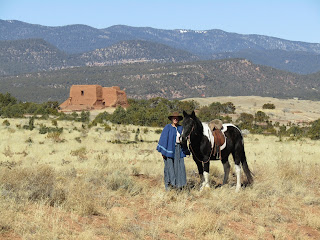 Fancy and I near the Pecos Ruins. 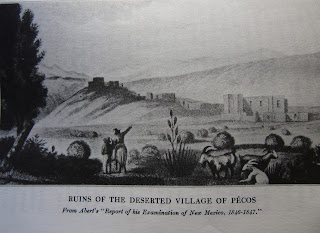 An old sketch of the Pecos Ruins.

The next stop going east would have been Kozlowski's Ranch and Stage Station. Kozlowski's provided meals to stage passengers, including trout caught from the nearby Pecos River. Tate and Abby enjoy just such a meal in my book! In relatively recent history, Kozlowski's (and the Pecos monument) were once part of Greer Garson's (the Hollywood actress) 'Forked Lightening Ranch.' It is now part of the Pecos National Historic Park. 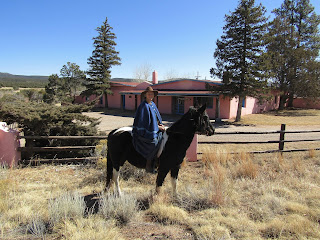 Outside what was once Kozlowski's, along the Santa Fe Trail.

After leaving Kozlowski's, the trail skirted the base of the massive Glorieta Mesa (now known as Rowe Mesa) on its way to San Miguel Del Vado and the Pecos River crossing. 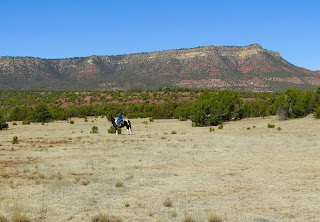 Fancy and I (and my dog Holly!) with the massive Glorieta Mesa behind us. 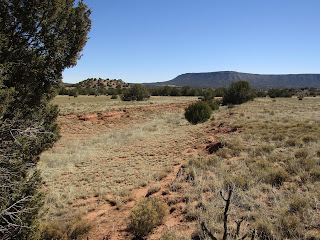 Long before the town of Las Vegas (NM) was founded in 1835, San Miguel (founded in the mid-1790s) was the first real settlement people traveling the trail from the east would encounter in what was then Mexican Territory. It had a plaza and a church and was also the main point of entry for eastern traders traveling to Santa Fe. It was here that customs officials inspected cargoes bound for Santa Fe and assessed their duty... to be paid once the traders reached the capital. The trail forded the river near the town's main plaza. Many travelers wrote of their experiences and impressions of San Miguel in diaries. 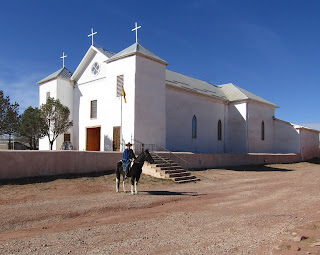 Fancy and I outside the San Miguel Church, which was built (or was started!) in 1805. 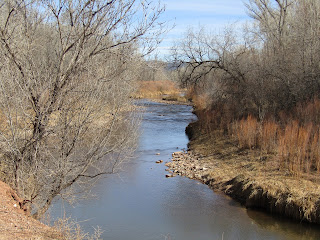 Standing at what was once the ford of the Pecos River for the Santa Fe Trail at San Miguel del Vado.

The next stop going northeast, would have been Bernal. There was a nice spring here so travelers liked to 'noon it' or camp at this site. A distinctive flat-topped butte dominates the scene called Starvation Peak. According to legend, either some colonial Spanish or Santa Fe Trail travelers were attacked by Indians near this spot and fled to the summit of this peak, where they died of starvation after a long siege. 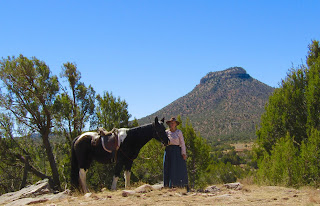 Fancy and I with Starvation Peak (at Bernal) behind us.

STAY TUNED FOR MORE OF OUR TRAVELS ALONG THE TRAIL!


Posted by Jackie Fleming at 11:26 AM No comments: