Last spring, Fancy and I managed to travel to many of the New Mexico, Santa Fe Trail sites. Both along the Mountain Branch of the trail and the Cimarron Cutoff. This is my version of a book tour for my novel "Into the Shadowlands" which is set along the Mountain Branch of the trail in 1876.... with a modern day twist! Although I posted these visits on facebook as and when I did them last spring, I originally visited them out of chronological order. For this blog, I have been posting them as the travelers of the trail would have encountered them if they had been traveling northeast, from Santa Fe, towards Missouri. So, once again, we resume our journey as those long ago pioneers and traders would have done. After leaving the famous camping spot and navigation landmark of "Round Mound," the next feature the travelers would be heading for is the distinctive duel rock formations known as "Rabbit Ear Mountain." There are two stories behind how this landmark got its name. One is that, from certain angles, these two rock outcrops look like a pair of rabbit ears sticking up out of the flat plain. The other is that, during Spanish times, a Cheyenne Indian chief called Rabbit Ears was killed by the Spanish in the vicinity. As the story goes, he was called Rabbit Ears due to his frostbitten ears, which were black tipped like the local jack rabbits that run all through the southwest. George Champlin Sibley surveyed the route during the very early years of the Santa Fe Trail, 1825-1827. In those days it was a brand-new trade route between the American states and what was then Mexican Territory. The Cimarron cutoff route was the original route used by traders and Sibley's journal "The Road to Santa Fe" follows his travels as he and his crew surveyed the road, pointing out landmarks, water sources, mileage (measured in 'chains') and pasturage. Below is one of his diagrams of distinctive land formations as he saw them entering into New Mexico from the northeast. As it happens, this entry in his journal is from October 12th... my birthday! Number 2 in the sketch is "Rabbit Ears," and number 3 is "Round Mound." This illustration was drawn from a campsite near McNees Crossing of the north Canadian River. ... our next point of interest. In Sibley's day, they called it "Louse Camp Creek"....

"A considerable party of People left this place this Morning, & to judge from appearances, left in some haste. We suppose they are Hunters from the nearest Spanish Settlements; and I think it probable have been hunting on the Semarone (Cimarron.) They may have taken alarm at our Party, & are hastening home in the supposition that they are pursued by Indians. This is all conjecture however. Upon some fragments of old Clothing which some of our People picked up, there were some body lice found; which circumstance confirmed us all in the belief that the camp had been occupied by Spaniards. We took the precaution to Pitch our Tents at a respectful distance from the old Camp. The Creek having no name, we now gave it the name Louse Camp Creek." 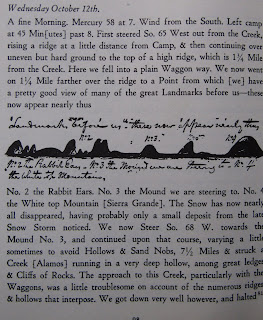 A sketch of landmarks as seen from the northeast, probably in the vicinity of McNees Crossing. This was drawn by George Champlin Sibley in his journal when he surveyed the Santa Fe Trail between 1825-1827. 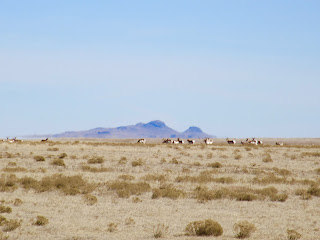 "Rabbit Ear Mountain," with antelope, as seen from the southwest, near "Round Mound." 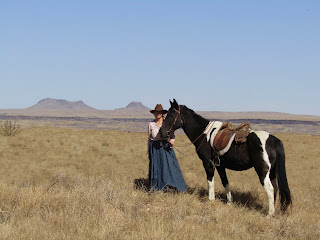 Fancy and I with "Rabbit Ear Mountain" behind us. This photo was taken from the east of this famous monument.

Heading northeast from "Rabbit Ears," not far from what is now the Oklahoma border, travelers crossed the north Canadian River at McNees Crossing, a rocky stretch of river bed in what is mostly a sandy creek. Wagon travelers preferred to cross where the river beds were solid enough to support the weight of heavy trade wagons. As stated above, this crossing didn't have an official name in Sibley's time but in the fall of 1828, two young men, McNees and Monroe, were ambushed and shot by Indians as they napped ahead of their wagon train on the banks of the river (now known as Corrumpa Creek.) When their wagon train caught up with them, McNees was dead and was buried on the spot.  Monroe, who was mortally wounded, was carried forty miles to the Cimarron where he died and was buried "according to the customs of the Prairies." Unfortunately, retaliations by white traders and friends of the slain young men, perpetrated on innocent Indians they encountered further down the trail, led to counter retaliations and so hostilities back and forth escalated for several years.

It was also at McNees Crossing that Josiah Gregg, a famous Santa Fe Trail trader and writer of the book "Commerce of the Prairies" celebrated July Fourth in 1831 in what was then Mexican Territory. It was also in the Rabbit Ear's vicinity that his party encountered a Mexican Cibolero, or buffalo hunter.

"These hardy devotees of the chase usually wear leathern trousers and jackets, and flat straw hats; while, swung upon the shoulder of each hangs his carcage or quiver of bow and arrows. The long handle of their lance being set in a case, and suspended by the side with a strap from the pommel of the saddle, leaves the point waving high over the head, with a tassel of gay pari-colored stuffs dangling at the tip of the scabbard. Their fusil, if they happen to have one, is suspended in like manner at the other side, with a stopper in the muzzle fantastically tasselled."

Josiah Gregg, "Commerce of the Prairies." 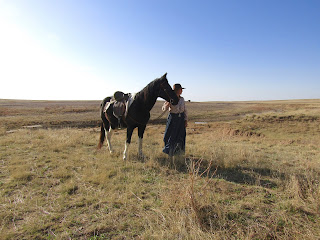 Fancy and I standing on the rise along the western bank of McNees Crossing. 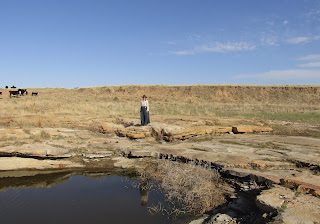 Me standing on the rocky 'bottom' of McNees Crossing. The water is low after a very dry winter. (Photo taken in spring.) 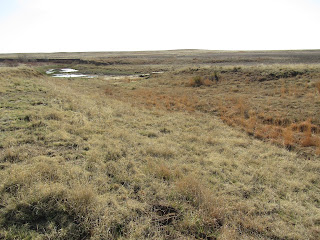 Wagon ruts leading down to McNees Crossing from the east. 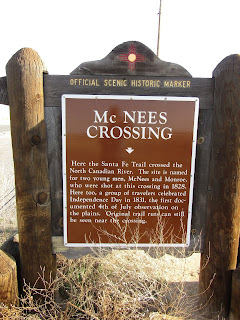 Today, McNees Crossing is on private land and the owner is welcome to folks coming to visit this historical site. But PLEASE be sure to CLOSE THE GATE as you come and go. As you can see from one of the photos, there are cows grazing along the creek and so visitors should be vigilant about the safety of all livestock they encounter. For my book tour, I am just (for now) covering the New Mexico stops along the Santa Fe Trail. From McNees Crossing the trail would have continued northeast through Oklahoma and on into Kansas where it reunited with the other branch of the trail (the Mountain Branch) either at Chouteau's Island or at the Cimarron Crossing of the Arkansas River, not too far west of the famous Caches landmark of the Santa Fe Trail. Along the way, there would have been very little water, hence the Cimarron Cutoff route was often referred to as the Desert Route.

STAY TUNED TO MORE OF OUR SANTA FE TRAIL TRAVELS! NEXT TIME: Fancy and I will travel to various sites along the Mountain Branch of the Santa Fe Trail.... this route is featured in my novel "Into the Shadowlands."

Posted by Jackie Fleming at 9:32 AM