The next point of interest, after leaving the Ocate area, to wagon trains traveling north along the Mountain Branch of the Santa Fe Trail would have been Rayado. The route from Ocate passed through a gap between Rayado Mesa and the foothills of the Sangre de Cristo Mountains to the west. Both Kit Carson and Lucien Maxwell homesteaded in this beautiful area in the 1840s. When Maxwell (then the caretaker of the massive Beaubien-Miranda Land Grant - later the Maxwell Land Grant- which he ran and ultimately inherited from his father-in-law Charles Beaubien, a Canadian Mountain Man and successful Taos trader) moved his headquarters to nearby Cimarron, a small military post was established at Rayado, using Maxwell's old buildings. Also, a "home station" of the Barlow and Sanderson stage station was operated here. A very important scene is set in Rayado and at Rayado Mesa in my book "Into the Shadowlands" and so it was great to be able to bring Fancy to this area last spring for my 'book tour.' There is an incredible amount of history in this region, including Native American history, Mountain Man history, Santa Fe Trail history, and, most notably, all of the violence and politics surrounding what was to be known as the Colfax County War. I'm not even going to try to cover the intricacies of that "war" here (look it up online... it is a great story!) But, it plays a big part in my book and the 'villains' of that war, most notably the "Santa Fe Ring" and any and all of their corrupt lawmen, politicians, governors, newspapers, judiciary and numerous henchmen are better than fiction! What a hornet's nest the region was at that time. When Maxwell sold his interests in the Land Grant in 1870, to an English company that re-named it "The Maxwell Land Grant and Railway Company," brewing disputes with 'squatters' who had moved onto the land grant without permission, tensions with Indians and of course corruption and profiteers, blew up into a full scale war rife with lynchings, reprisals and murder. Kit Carson didn't stay very long in Rayado. He mostly lived in Taos, between his numerous trips back and forth across the country as Indian Scout and soldier until his death in 1868. Maxwell's house still stands in Rayado (run by the Philmont Scout Ranch,) but the building (which is now used as a museum) that is identified as Kit Carson's house, is not the original. Some of the walls of this newer building incorporate the remains of what was Kit Carson's home, but mostly this building is a very nice reconstruction of a typical New Mexico frontier home, complete with an inner placita (courtyard.) Wagon ruts are clearly visible near Rayado. Some to the south, where the trail skirted the base of Rayado Mesa and others to the north-east where the trail swept down into the settlement. 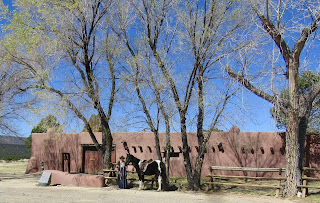 Fancy and I outside the re-constructed "Kit Carson House" in Rayado last spring. 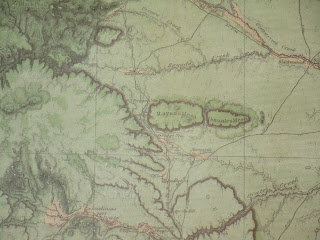 A geographical survey map of the Rayado area from 1876 ~ the year in which my book "Into the Shadowlands" is set. Any and all 'roads' on this map are wagon roads. This was before the railroad came into northern New Mexico. You can see the wagon road heading north, through a gap alongside Rayado Mesa from Ocate to Rayado. 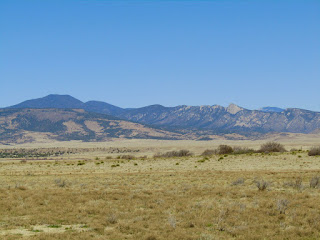 A view of the Rayado area looking from southeast. 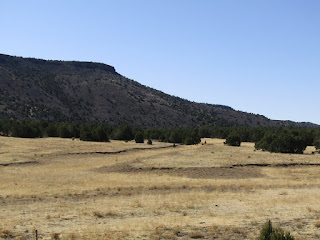 Wagon ruts at the base of Rayado Mesa where the road enters the Rayado area from Ocate, to the south. 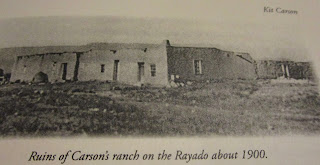 This caption speaks for itself! 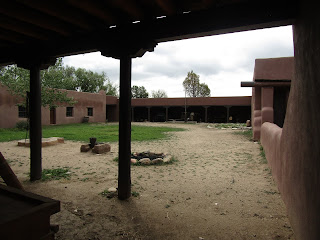 The interior courtyard (placita) of the "Kit Carson House," now run as a museum by the Philmont Scout Ranch. 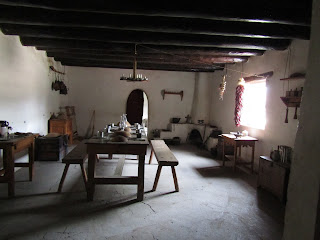 One of the rooms inside the "Kit Carson House," set up to show life on the frontier in a typical New Mexico style house. 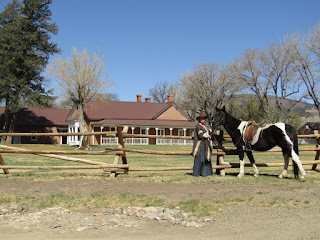 Fancy and I outside Maxwell's house in Rayado. 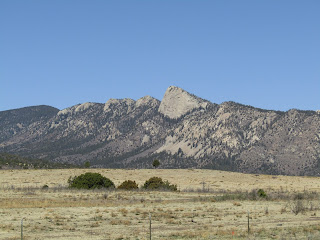 The distinctive landmark called the "Tooth of Time" between Rayado and Cimarron.

Posted by Jackie Fleming at 8:42 AM