Heading north out of Rayado, the next stop along the Mountain Branch of the Santa Fe Trail would have been Cimarron. As previously mentioned, in my post about Rayado, the "Colfax County War"  was the cause of much violence in the region and Cimarron was at the center of it. Long before the "war" though, frontiersman Lucien Maxwell moved his operations and ranch headquarters from Rayado to Cimarron in the mid-1850s. Owner of a 1.7 million acre land grant, acquired through his father-in-law Charles Beaubien, he had substantial power and wealth in the area. Here he built a mansion in 1864. The house no longer exists (it burned in 1885) but it used to take up a whole block along one side of Cimarron's plaza. Much has been written about the luxurious furnishings of this mansion and the great hospitality Lucien showed travelers passing through the area. While in Cimarron, amongst many other structures and business enterprises, Maxwell built and operated a stone grist mill, which sold corn meal and wheat flour to nearby residents, helped provision Santa Fe Trail travelers and also supplied food for the Indian agency. Maxwell was Indian agent for the Utes and the Jicarilla Apaches. In 1870, Lucien sold his huge land grant to a group of investors and moved south to Fort Sumner, an ex-military outpost built to guard and administer the site of General Carlton's disastrous and inhumane relocation (the "Long Walk") and internment of the Navajo Indians at Bosque Redondo (which failed miserably, closing in 1868, the same year Kit Carson died - a man who had played a major role in the defeat and relocation of the Navajos.) It was in Fort Sumner, in 1881, that the infamous "Billy the Kid" was killed by Pat Garrett in what was then Pete Maxwell's (Lucien's son) house. BUT, that's a whole other story! As you can see, so many stories and characters of the time are interwoven and it would be too easy to digress! I won't try to summarize all of the in's and out's of the "Colfax County War" here (I have supplied a link you can click on for more info). After Maxwell sold the grant, violence erupted between various factions, most of whom sought to profit in one way or another from the grant's assets. In the center of this hornet's nest was a group known as "The Santa Fe Ring." As mentioned in my Rayado post, my book "Into the Shadowlands" is set along the Mountain Branch of the Santa Fe Trail and of course Cimarron and the violence surrounding it plays a big part in the story... not least the Santa Fe Ring! Who could resist such a juicy backdrop! It was very exciting for me to take Fancy to this notorious little town and ride the streets where so much history and murder and mayhem had taken place! Especially at the St. James Hotel. Built in the 1870s by a Frenchman called Henri Lambert (who had once been a chef for General Grant and President Lincoln,) it attracted many colorful patrons, including outlaws such as Clay Allison and Doc Holliday and notorious lawmen such as the Wyatt Earp. During the "Colfax County War" it was more or less ground zero for much of the violence. There are still bullet holes in the pressed tin ceiling of the saloon. 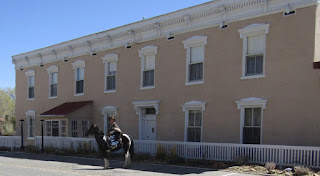 Fancy and I outside the St. James Hotel in Cimarron, NM. 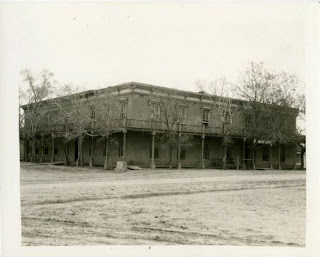 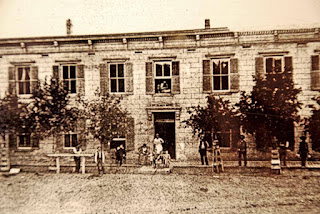 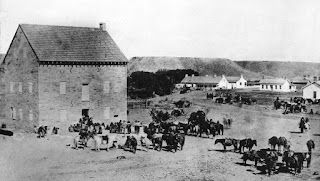 Maxwell's grist mill when it supplied food to the Indians and surrounding settlers. 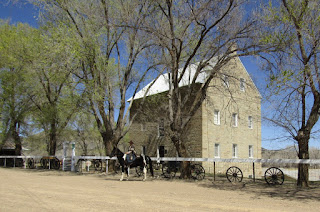 Fancy and I outside Maxwell's grist mill in spring 2018.

From Cimarron, heading north, travelers of the Mountain Branch would have passed by the "Clifton House," a Barlow and Sanderson Stage Company "home station" and lodging place. Sadly, little more than a few scattered foundations remain of the once three-story building and its surrounding barns and blacksmith's shop. The food and lodgings offered here had once been considered some of the best along this part of the trail. Continuing towards Colorado, the trail approached one of the most daunting and challenging obstacles that travelers of this route would have to endure. The notorious "Raton Pass." Fancy and I have yet to visit this landmark but plan to in the near future....

STAY TUNED TO THIS SITE FOR MORE OF OUR EXPLORATIONS AND ADVENTURES ALONG THE SANTA FE TRAIL.

Posted by Jackie Fleming at 2:48 PM