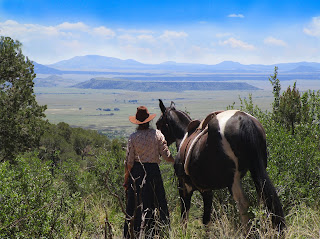 Fancy and I look down into New Mexico from the Raton Pass.

Well Fancy and I (and Holly, my pup) finally did it! We have visited ALL of the Santa Fe Trail sites, both the Cimarron Cutoff Branch and the Mountain Branch, in New Mexico! This has been my version of a book tour for my novel "Into the Shadowlands." This past July we went to the New Mexico side of the infamous Raton Pass, one of the more daunting hurdles encountered by trail travelers using the Mountain Branch. Its steep climbs on narrow, treacherous roads brought many a wagon train to a stand still with broken wagons, accidents and death to the livestock. This was the only site I have visited in summer. Most of my 'tour' was conducted in the spring, with cooler temps and no bugs or tourists. Raton was so beautiful this summer though, with lush green range and running streams that I just couldn't resist, but, with temps in the high 80's, my critters and I were soon pooped out by the heat and burning sun. Most travelers of the Santa Fe Trail journeyed in the summer months and so it was a reminder of what those trail travelers (and their beasts of burden) endured. Not just in the high, dry New Mexico summer heat (or during its monsoon season with daily thunderstorms), but also in the more humid states of Kansas and Missouri. Ugh! How did they do it!? No shade, save what could be offered by the wagon canvas, no sunscreen, dehydration from scant water, no bug spray, dust and no showers. In my novel, there is a key scene set along the Raton Pass and so of course it is a highlight of my book tour. 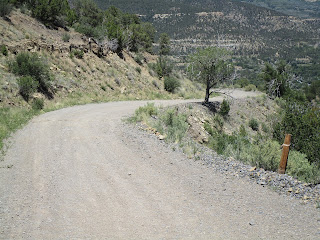 Switchback along the Raton Pass. 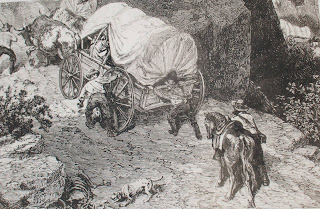 Vintage sketch of wagons on the Raton Pass.

)
Fancy and I hiked a small section of the switchbacks near the end of the New Mexico side of the trail. Looking down onto the New Mexico plains and back at the jagged Colorado Mountains. Perhaps, when things are cooler, I will go back and hike deeper along the pass trail. I was delighted to see the paw print of a bear where it had passed shortly after the rain had turned the trail to mud. I thought of Susan Shelby Magoffin and the "Mr. Bruen" she mentions in her lovely account of navigating the Raton Pass in her diary "Down the Santa Fe Trail and into Mexico" written in the summer/fall of 1846. The section of the trail we walked was wide and beautifully graded, with just a few potholes and washouts, but back in the days of the Santa Fe Trail, it was a rough, narrow trail, rife with boulders, crumbling scree and trees whose branches reached out and played havoc with the passing wagons. In 1865, "Uncle" Dick Wooten opened a toll road for wagons over the pass. The road was somewhat improved from its mule path origins but still presented a major challenge to wagon trains. His ranch, inn and toll gate were on the Colorado side of the pass. I have read several first-hand accounts by travelers of the pass, all of whom were traveling from Colorado into New Mexico when they traveled the Raton Pass. But of course, trail traffic went both ways. 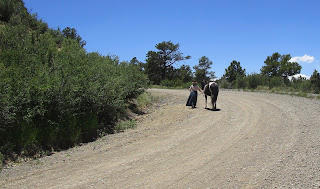 Fancy and I (and my pup, not pictured) walked a section of switchbacks.


"Next day we reached the top just about sunrise, and the finest view perhaps I ever saw met the eye. It is very difficult to contrast these pure American landscapes with any other; everything is on so grand a scale. There may be finer single mountains, like Vesuvius, lonelier valleys, like some in Switzerland, but there is nowhere such vastness and grandeur. The most striking feature of the scene was the contrast in tone and color between the view to the north and that to the south. To the north the outline was cut clear and distinct, and the picture cold and majestic; to the south there was warmth and richness of color, a light velvetty purple haze seemed draped over the stretch of mountains and plain; the one awed, the other attracted."
Joseph Pratt Allyn, in a letter dated November 1863, in the book "West by Southwest" 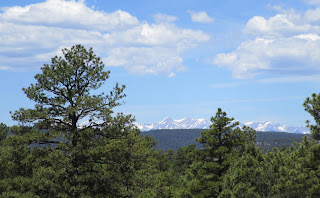 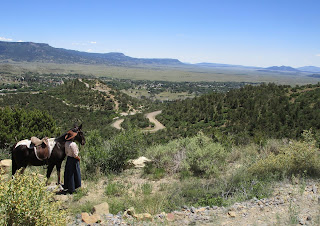 Looking out at New Mexico.

"The summit of the ridge was reached after an hour's toil; and, stopping a moment for the fatigued animals to blow, we rapidly descended. The immense precipices of bare rock and earth, the confusion in which nature seemed involved, caused all to remark the forbidding aspect on the 'Canadiano' side of the summit. At some steep hills, near the pass terminus, we picked our way over a road, which, in verity might be termed rough. Pine trees interfered with the free use of the whip; large rocks obtruded their rude fronts in the torturous road; one "wo-ha-a" too many or a "gee" too few here endangers the safety of the unwieldy teams and burdens. The debris of wagons, such as fellies, loose tire, and tongues snapped short off shewed unmistakable signs of mismanagement and told plainly that "government" was a loser in the Raton Pass."
Lewis H. Garrard, "Wah-to-yah and the Taos Trail." 1846-47.
(Note: The 'Canadiano' side is the New Mexico side. It refers to the Canadian River.)
"Worse and worse the road! They are even taking the mules from the carriages this P.M. and a half dozen men by bodily exertions are pulling them down the hills. And it takes a dozen men to steady a wagon with all its wheels locked - and for one who is some distance off to hear the crash it makes over the stones, is truly alarming. Till I rode ahead and understood the business, I supposed that every wagon had fallen over a precipice. We came to camp about half an hour after dusk, having accomplished the great travel of six or eight hundred yards during the day."
Susan Shelby Magoffin, "Down the Santa Fe Trail and into Mexico." 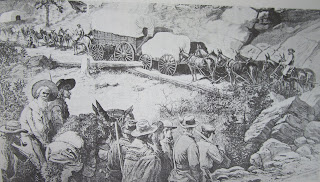 Another vintage sketch of a wagon train navigating the Raton Pass.


Thank you, thank you, thank you to my darling horse Fancy for putting up with all of my book tour silliness! I love that sweet horse (and of course my pup Holly) for their patience and tolerance during our Santa Fe Trail adventures! XX I am so moved and delighted to have shared this dream come true with two very lovely souls. The Raton Pass plays a crucial role in my book "Into the Shadowlands," and so I was delighted to include it in my book tour. Stay tuned for my coverage of Santa Fe. Although, technically, it should have been the first of my blog posts along this journey (given the direction I chose to follow the trail,) I have saved it for last. Fancy, Holly and I visited it this past spring and had fun recreating historical photographs at various locations within the old city.
Posted by Jackie Fleming at 5:52 AM No comments: