Although these posts about Santa Fe really should have come at the beginning of my previous Santa Fe Trail posts (given the direction our 'journey' took us.... from Santa Fe northeast to Missouri,) I have chosen to save Santa Fe until last. Since I didn't take my horse Fancy into the city itself, I chose a different way to visit it. To capture it during its Santa Fe Trail days, I have tried to recreate old photographs showing particular sites past and present. There are many different sites, all important to Santa Fe's history and most of them playing a part in my novel "Into the Shadowlands," and so I have covered Santa Fe in three different chapters for my 'book tour.' 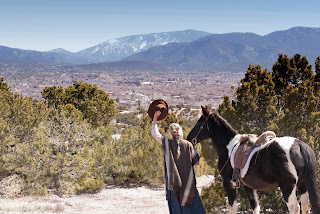 Fancy and I outside Santa Fe, spring 2019.
(photo by Stephen Lang.) 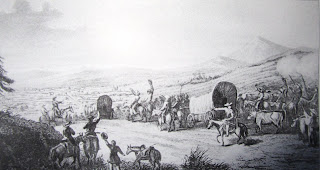 "Arrival of the Caravan at Santa Fe" Josiah Gregg.

This sketch from Josiah Gregg's book "Commerce of the Prairies" is titled "Arrival of the Caravan at Santa Fe." After crossing hundreds of miles of prairie and rough and dangerous country from Missouri, reaching their final destination was met with relief and euphoria.... and, in some cases, disappointment.  As Fancy and I stood for this photo, I truly felt the same euphoria. We had finally covered all of the major Santa Fe Trail sites within New Mexico, which has been a dream of mine for a long time.
There are many accounts of first impressions of 1800s Santa Fe. In Josiah Gregg's book, his comments mirror that of many other 'first-timers.'
"A few miles before reaching the capital city, the road again emerges into an open plain. Ascending a table ridge, we spied in an extended valley to the northwest, occasional groups of trees, skirted with verdant corn and wheat fields, with here and there a square block-like protuberance reared in the midst. A little further, and just ahead of us to the north, irregular clusters of the same opened to our view. "Oh, we are approaching the suburbs!" thought I, on perceiving the cornfields, and what I supposed to be brick-kilns scattered in every direction. These and other observations of the same nature becoming audible, a friend at my elbow said, "It is true those are heaps of unburnt bricks, nevertheless they are houses - this is the city of Santa Fe."
And, Marian Russell, seeing Santa Fe for the first time as a child, describes it so beautifully in her memoir "Land of Enchantment."
"How our hearts waited for a sight of the Santa Fe of our dreams. We thought it would be a city, and waited breathlessly for the first sight of towers and tall turrets. We were in Santa Fe before we knew it. We crossed a water ditch where half-naked children stood unashamed and unfrozen to watch us. Then we passed through a great wooden gateway that arched high above us. We moved along narrow alley-like streets past iron-barred windows. We were among a scattering of low, square-cornered adobe houses. We saw a church with two cupolas. Mexicans, Indians and half-breeds shouldered by us. We saw strings of red peppers drying, and brown babies asleep by old adobe walls.
Our caravan wriggled through donkeys, goats and Mexican chickens. We came to the plaza and found there a man, a tall man, leaning on a long rifle. He had a neck like a turkey, red and wrinkled, but he was the boss of the plaza. We went where he told us. Under his guidance, wagon after wagon fell into place. Dogs barked at us. Big-eyed children stared at us. Black-shawled women smiled shyly at us. We were in Santa Fe." 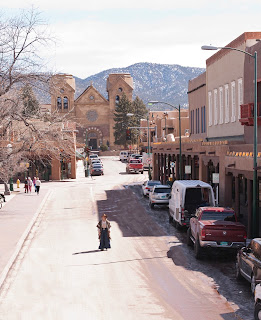 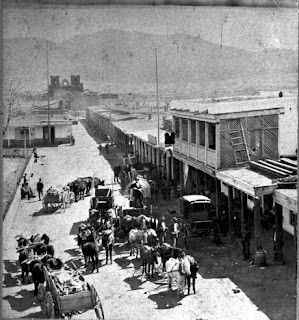 Photo of the Santa Fe Plaza taken around the 1860s.

The city of Santa Fe was founded by the Spanish in 1610 and there has pretty much been a plaza at this location since then. The Santa Fe Trail was opened in 1821 and this spot was the terminus of it (for wagons journeying towards Santa Fe - in what was then Mexico - from Missouri in the east.) Thousands of trade wagons ended their journey from the American states on the Santa Fe Plaza and unloaded their cargoes at the many stores and warehouses that lined the square. Prior to the Santa Fe Trail, the main trade route out of Santa Fe had been the Camino Real, the main road south to Chihuahua. As you can see, not much has changed! In the background of the vintage pic, you can see the Parroquia, the old adobe church that had stood where the St. Francis Cathedral now stands. The Paroquia was built in 1714-17, replacing the orignal church (built in 1626) that had been burned down during the Pueblo Revolt of 1680. The stone Cathedral (which was commissioned by Archbishop Lamy,) was constructed between 1869 and 1884. It was built around the existing adobe Parroquia, which was then dismantled, 'brick by brick.' In the vintage photo, if you look very closely, you can see the lower walls and the beginning of the arched doorway of the cathedral growing around the base of the Parroquia. My book "Into the Shadowlands," is set in 1876 (and also in present day Santa Fe,) right when the new Cathedral was in the midst of construction.
Special thanks to the Thunderbird Bar and Grill for allowing us to utilize their balcony for our 2019 shot! 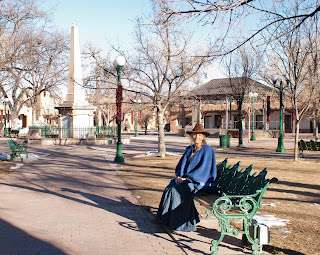 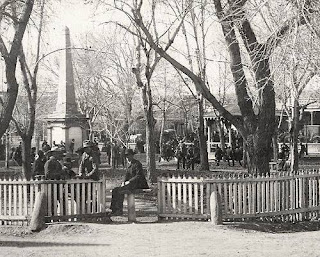 In the above photo, I am sitting more or less where the fellas in the vintage shot were sitting. Behind us is the Soldiers Monument. It is dedicated to the Union soldiers who died at the Battle of Glorieta on the Santa Fe Trail near Pigeons's Ranch. It is also dedicated to pioneers who died at the hands of Indians. The word "savage" (when describing the Indians) has been somewhat controversial and, as always, is one sided. This monument was erected in 1867 and so has been witness to much history from its vantage point in the middle of the plaza! 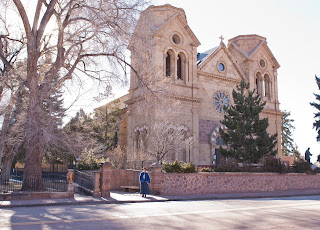 In this pic I am standing in front of the St. Francis Cathedral, spring 2019.
(photo by Stephen Lang.) 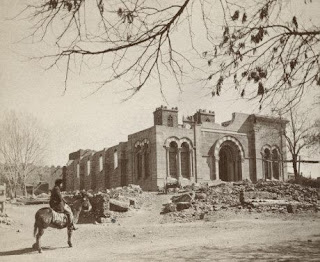 The St. Francis Cathedral was commissioned by Archbishop Lamy, a French clergyman who came to Santa Fe in 1851, and was built around the the Parroquia, an existing adobe church that had stood in that location since 1714-17. In the vintage photo, you can still see the two crenelated towers of the old Parroquia peeking up above the growing walls of the stone cathedral. The first cornerstone of the cathedral was laid in July 1867, but construction was slow and went in fits and starts. Craftsmen were brought over from Europe and there were several changes in architects and contractors and funding was always an issue. Finally, the cathedral was finished in 1884. The Parroquia was dismantled 'brick by brick' and used to pave a terrace around the cathedral. Since my book "Into the Shadowlands" is set along the Santa Fe Trail in 1876 (and in present day,) the cathedral was very much under construction during the time Abby and Tate arrive in Santa Fe! 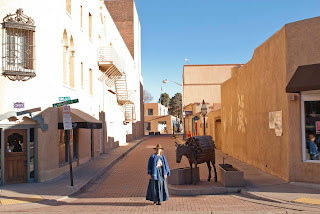 Here I am standing next to the burro monument at the entrance to Burro Alley in the spring of 2019.
(photo by Stephen Lang) 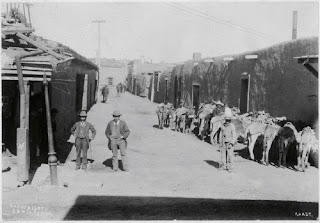 Traders and burros at the entrance to Burro Alley in the 1800s.

One of Santa Fe's most notorious streets, Burro Alley was home to saloons, brothels and gambling dens.. and, of course, burros! Many diaries and memoirs from folks who had visited Santa Fe in the 1800s mention Burro Alley, and one of its most famous business owners, Dona Tules, also known as Gerdrudis Barcelo. Dona Tules ran a monte parlor and was a very colorful character in Santa Fe's history from the time she opened her gambling hall on Burro Alley in the 1830s until her death in 1852. She had an elaborate funeral and was buried at La Parroquia (where the St Francis Cathedral now stands) which was a sign of her influence and esteem, especially given that she was a proprietress of sin!    Numerous people frequented her monte parlor over the years, including Governor Manuel Armijo (during Mexican rule), many preists, Santa Fe Trail traders, mountain men, US soldiers and even some of the social elite of Santa Fe. You can see the window of her sprawling home at the end of Burro Alley in the vintage photo, which is now the location of the Santa Fe County Courthouse. An important scene in my book also takes place in that building! Burro Alley got its name from the profusion of burros that were tethered there. The burro was a true beast of burden and many a tiny donkey was seen half buried in loads of firewood and other wares in the streets of Santa Fe. Their enormous contribution to Santa Fe's history is now commemorated with a statue at the San Francisco Street entrance to the alley. The east side of the alley hasn't changed much over the years, but the west side is now the location of the Lensic Theatre, built in the 1930s it is a mix of art deco and Moorish-Spanish influence.