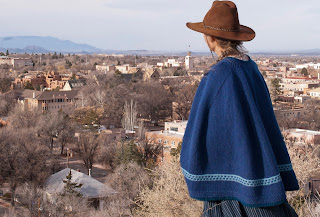 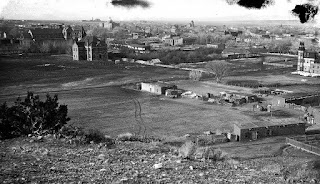 Another spot on my Santa Fe "past and present" book tour for my novel "Into the Shadowlands." The above photos were both taken from Fort Marcy Hill, overlooking Santa Fe. I am guessing the vintage shot was taken in the mid to late 1880s due to the fact that the cathedral looks either complete, or close to it. In the vintage shot, you can clearly see the St. Francis Cathedral's towers and you can see them today, just to the left of my shoulder. A star shaped fort was built on this hill in 1846, shortly after the Americans took over Santa Fe during their war with Mexico. But this fort was little used. Instead, the military created the Fort Marcy Reservation, utilizing the existing buildings, barracks and gardens of the old Spanish/Mexican presidio north of the plaza (behind the Palace of the Governors.) Prior to the Mexican War, the Mexicans had used the hill as a graveyard. By the 1850s, when Marian Russell and her mother and brother journeyed across the Santa Fe Trail and took up residence in Santa Fe, the star fort on the hill was derelict. In her beautiful memoir "Land of Enchantment" Marian recalls Fort Marcy.
"Fort Marcy had been in ruins many years, but an old two-story building still stood there. Inside the building was another smaller one that was supposed to have been used by sharp shooters during the Mexican War. Erosion was opening many old graves in Fort Marcy. Some bleached old bones were lying there. With the savagery of children we gathered up the old bones and played a game we called, "Steal The Dead Man's Bones."
Little remains of the fort now. A few swales and bumps in an open park. The Cross of the Martyrs was built on the hill in 1920. The Fort Marcy Reservation plays an important part (in 1876) in my novel "Into the Shadowlands," and the current Fort Marcy residential area also has a role too! :) 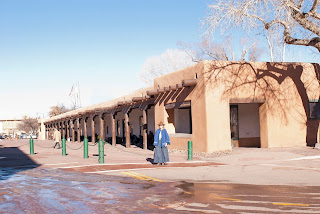 In this photo, I am standing outside the Palace of the Governors. Spring 2019.
(photo by Stephen Lang.) 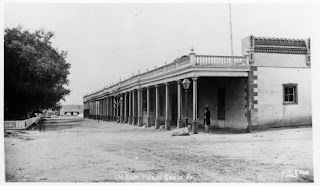 Vintage photo of the Palace of the Governors. Around the late 1870s?

The Palace of the Governors was built in 1609-1610. The palace, also known as the casa real, was one of the very first buildings in the new Spanish city called Santa Fe. From the time of its construction, along the whole north end of the Santa Fe Plaza, this building, and the adjoining presidio, represented the main seat of government for the region and the residence of the governor through the Spanish era, the brief Mexican era and into the American Territorial period. The palace has been witness to so much of New Mexico's history, surviving the Pueblo Revolt of 1680 and many renovations, excavations and face-lifts! It's main construction is adobe and until a tin roof was added (previously it had just been vigas, brush and dirt) in 1877, it had been famous for a leaky roof, which required that residence and visitors use an umbrella indoors during rainstorms! A Victorian balustrade was also added to the portal in 1877. When it became the Museum of New Mexico in 1909, it was remodeled again. This time in what was fast becoming a popular style in Santa Fe, the "Pueblo Revival" look, which now dominates the city. Native Americans, representing multiple New Mexico tribes, sell their beautifully crafted jewelry under the palace portal. One of the palace's most famous governors was Lew Wallace. It was while he was stationed in New Mexico in the 1880s, that he finished writing his novel "Ben Hur." 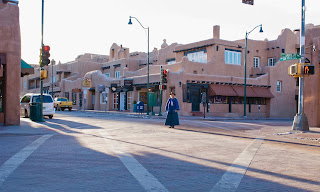 Here I stand in the middle of the junction outside the modern La Fonda Hotel. Spring 2019.
(photo by Stephen Lang.) 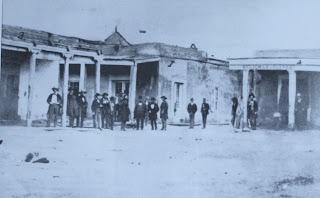 A group of men stand at the same junction in front of the hotel in the 1870s. 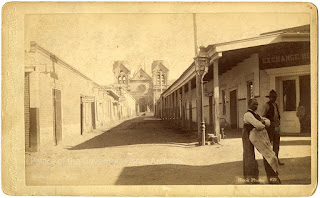 Another shot of the hotel, known as the Exchange Hotel back then (and in my novel). In the background you can see the St. Francis Cathedral, complete, or close to it. This dates this photo to at least the mid to late 1880s.

The La Fonda Hotel, Santa Fe. Another stop on my past and present visit to Santa Fe for my "Into the Shadowlands," Santa Fe Trail book tour. We had to get up really, really early for most of these shots, to avoid traffic and people, and you can see the long shadows as I stood in the middle of the intersection right at the southeast corner of the plaza.... just like the chaps in the vintage shot. There has been a fonda (or inn) at this location pretty much since the founding of Santa Fe in 1610. In its early days, it serviced the needs of the folks who traveled the Camino Real (King's Road) from Mexico, which entered Santa Fe on what are now Agua Fria Street and San Francisco Street. The inn has gone by different names and had countless proprietors over its 400 year history. There are also numerous stories surrounding it too.... some fact, some fiction and mostly all of them colorful! This hotel, past and present, is mentioned in my novel. Around the time my story is set (the past part of it, 1876,) this inn was known as the Exchange Hotel. The Exchange remained until 1919 when it was demolished and a new Pueblo-Spanish style hotel was built in the 1920s. Until the late 1960s, this new "La Fonda" was one of a chain of Harvey House Hotels, linked to Santa Fe Railroad. 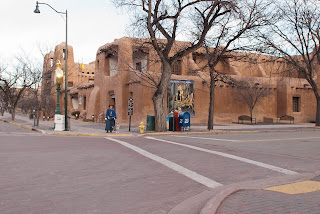 Holly (my dog) and I outside the New Mexico Fine Arts Museum, Santa Fe, spring 2019.
(photo by Stephen Lang.) 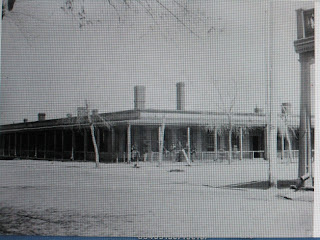 The old Fort Marcy HQ building that stood on northwest corner of the Santa Fe Plaza.

The Headquarters building for the Fort Marcy Reservation. Although a star shaped fort had been constructed on a nearby hill in 1846, the military mostly utilized the old Spanish/Mexican presidio buildings and grounds just north of the Palace of the Governors building in downtown Santa Fe. This building, just to the west of the palace, does have a scene in my novel! Prior to it becoming the HQ (in 1868, when the reservation was created and the HQ was constructed,) this site must have served as a boarding house at some point. In Marian Russell's poignant memoir "Land of Enchantment," she makes reference to it. "In the spring of 1854, we moved to Santa Fe and mother leased a large adobe house on the central Plaza. That adobe house, our first home in Santa Fe was torn down later and the present New Mexico Art Museum erected in its place. We soon had our house filled with military boarders. They paid at the princely rate of $45.00 per month."
As Marian mentions, in 1916 this site became the location of the Fine Arts Museum which was built in the popular Spanish-Pueblo style that dominates modern Santa Fe. In the 2019 photo, Holly (my dog) and I are standing more-or-less where the portal of the old HQ used to be. 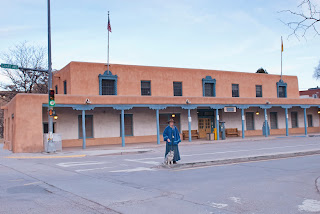 Holly and I outside the Santa Fe County Courthouse, spring 2019.
(photo by Stephen Lang.) 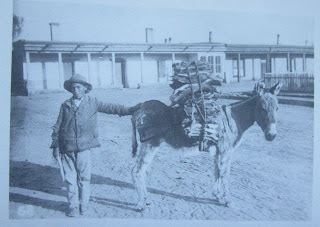 A boy and burro outside Dona Tules' home in the same location.

This building on the corner of Grant Avenue and Palace Avenue (near the entrance to Burro Alley), in Santa Fe, plays a major role (in 1876) in my novel "Into the Shadowlands," so I had to include it in my Santa Fe Trail book tour. It is now the Santa Fe County Courthouse (which will have a role in the sequel to 'Shadowlands,' called "Whispers across the Plane,"... still in the works) but it once was the sprawling home of one of Santa Fe's most notorious characters, Gertrudis Barcelo, AKA Dona Tules. Born in Mexico at the turn of the 18th Century, by the 1840s, she had established a successful gambling enterprise on Burro Alley and was very wealthy. I'll borrow from the words of Josiah Gregg, an early trader on the Santa Fe Trail, and auther of a fabulous book about his experiences "Commerse of the Prairies."
"Some tweleve or fifteen years ago there lived (or rather roamed) in Taos a certain female of very loose habits, known as La Tules. Finding it difficult to obtain the means of living in that district, she finally extended her wanderings to the capital. She there became a constant attendant to one of those pandemoniums where the favorite game of monte was dealt pro bono publico. Fortune, at first, did not seem inclined to smile upon her efforts, and for some years she spent her days in lowliness and misery. At last her luck turned, as gamblers would say, and on one occasion she left the bank with a spoil of several hundred dollars! This enabled her to open a bank of her own, and being favored by a continuous run of good fortune, she gradually rose higher and higher in the scale of affluence, until she found herself in possession of a very handsome fortune. In 1843, she sent to the United States some ten thousand dollars to be invested in goods. She still continues her favorite 'amusement,' being now considered the most expert 'monte dealer' in all Santa Fe. She is openly received in the first circles of society: I doubt, in truth, whether there is to be found in the city a lady of more fashionable reputation than this same Tules, now known as Senora Dona Gerdrudis Barcelo."
"The love of gaming" (Josiah's words) was very much in evidence in Santa Fe. "It prevails in the lowly hut, as well as in the glittering saloon; nor is the sanctity of the gown nor the dignity of the station sufficient proof against the fascinations of this exciting vice. No one considers it a degradation to be seen frequenting a monte bank: the governor himself and his lady, the grave magistrate and the priestly dignity, the gay caballero and the titled senora may all be seen staking their doubloons upon the turn of the card; while the humbler ranchero, the hired domestic and the ragged pauper, all press with equal avidity to test their fortune at the same shrine."
Dona Tules died in 1852 and after a very elaborate funeral, was buried at La Paroquia, the adobe church that once stood where the St. Francis Cathedral now stands. Her home on the corner of Grant and Palace went through several hands after that. At one point (in an account I saw dated 1883), I believe, it became the temporary chambers of the district court and was occupied by the territorial chief justice. A very important scene in my novel "Into the Shadowlands," (set in 1876 and in present day,) takes place here. The vintage photo shows a little boy with his burro carrying firewood standing outside Dona Tules' house, as it would have looked during that period. The home was demolished in 1939 and the new Santa Fe Courthouse (pictured with me and Holly -my dog- standing in front of it in 2019) was constructed.